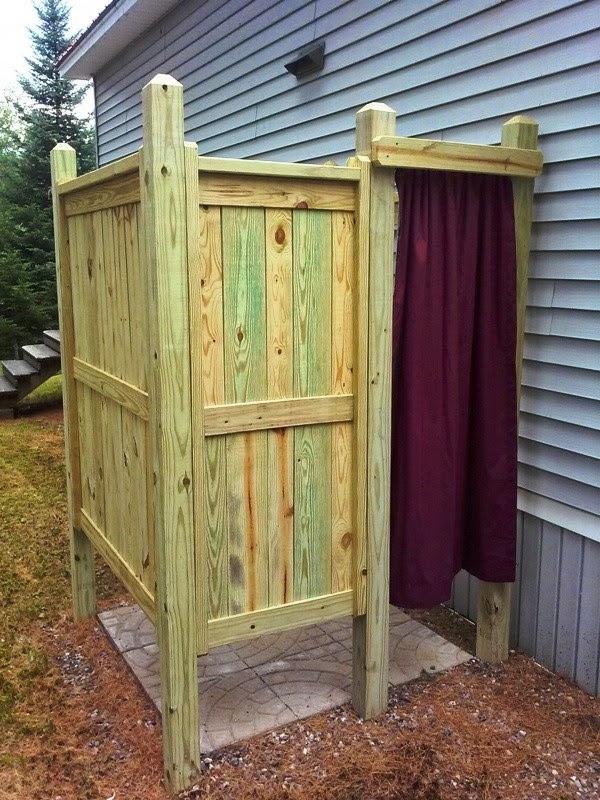 I can't believe that we are well into the summer season and in fact, two of the three key summer holidays have already passed us by. Time truly is flying by. It has been a very long time since I've done any updates or written much of anything at all. I've spent the summer nomadic for the most part, spending time between MA, ME and VT doing a host of projects in each location.


One of the recent projects I'd been planning for sometime was an outdoor shower in ME. I'd toyed back and forth with how exactly I wanted to do it and finally decided on a free standing unit with a stall made from pressure treated panels attached to 4x4 PT posts, against but not attached to the house. I would simply bury the posts into the ground and let then float with the frost. I found some nice 16x16" patio blocks that I would use for the floor to keep things clean.

I pre-built the panels from PT 2x4 rails with the inset free floating panels made from 2' long sections of PT 1x5" (3/4" dimensional board not 5/4 decking). The finished panels were heavy as the PT was wet, ala Home Depot swamp lumber. However, they came out nice and the whole thing went together easily and quickly. 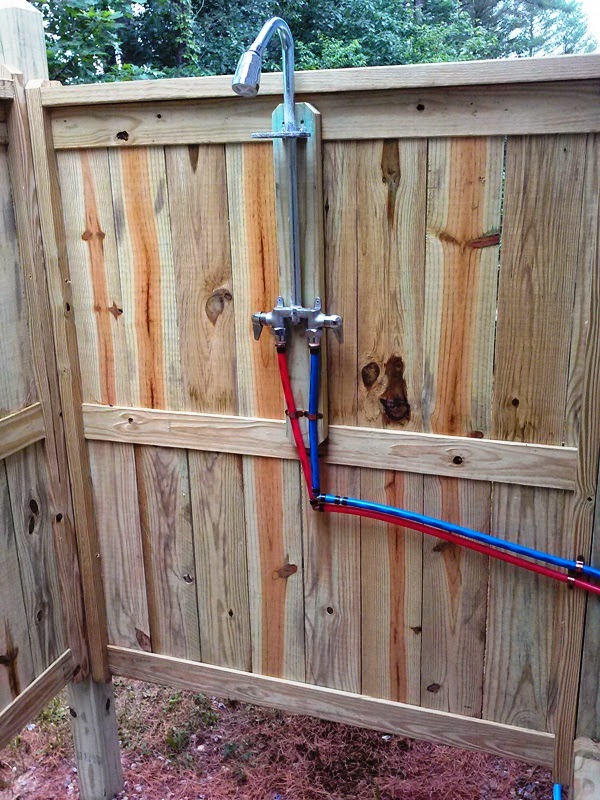 For the plumbing and hardware I used a utility shower that I found on Amazon for $50. It was perfect for what I had in mind and the water input was reversible so I could feed from the bottom, making for easy draining in the fall. For the pipe I used crimp fit Pex, the same thing that I used in my washing machine project in ME this past winter. It looks a little rough as I went extreme on the slope of the tubing so as to make for a clean drain when the time came. That said, it works great and has been a solid addition to the place. Now we just need one at camp in VT.

Truth be told, we have spent the majority of the past few weeks in ME and VT. The normal M.O. is for us to head to ME where I do some yard chores and Cathy works from home, making the bacon so to speak. I then head over to camp in VT and work on the massive renovations that we have planned.

When we purchased the camp just a few days more than one year ago, at a very attractive price, we knew that it was rough and that there were a number of sweeping projects that we wanted, and in many cases, needed to perform. The place is a camp and the fact that it is 3 acres of nice land in a great location and has power, septic, water and a usable road in to it means the camp itself being usable at all was a pure bonus. If you add up the costs of running power or digging a spring or a septic system or putting in a 200 yard road, the sum of those would be more than we paid for the whole property. This is why we bought it; we could see the value. The camp itself is sound, though clearly built by non-professionals. The more you dig and tear the more you find. This is OK when we put it all in focus, it is just a camp. 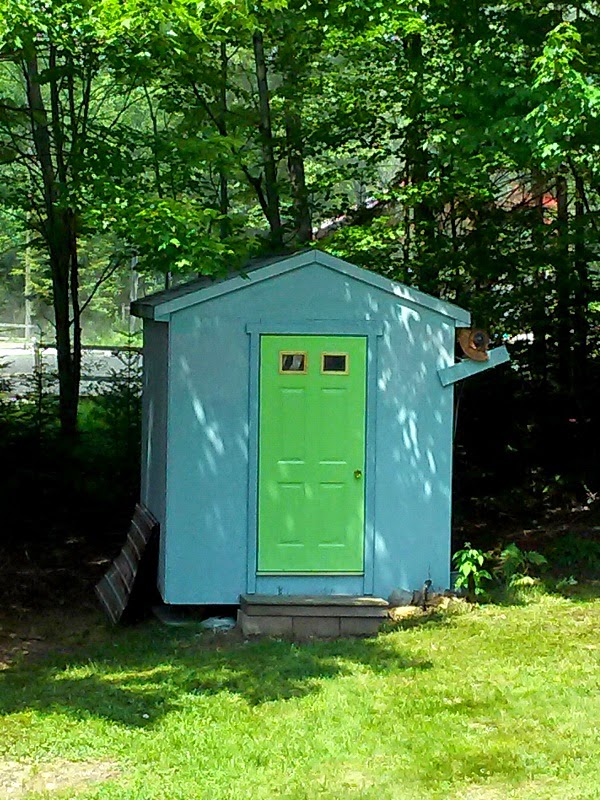 So in the long list of projects, I've finally gotten started on some of the core efforts. We had a couple of sidetracks earlier in the season. For instance, I spent a day replacing a failed hot water heater. I also came across a free from my dad's junk pile behind the barn, steel entry door. It was pretty beat and had gone from me, to my brother and then to my father's pile. In looking it over though it seemed OK for the task I had in mind, the camp shed. It has a crappy plywood door with a padlock. I spent part of a day framing the rough opening using materials on hand (decades old rock solid fir 2x4's) and then did the finish casing with some rough-cut 1x barn boards I also had lying around. A couple of cans of apple green Rust-Oleum and some fresh globby old grey latex exterior paint on the face and trim and wow, what a difference.

Beyond those types of smaller scale projects, like these, raking the driveway with the lawn tractor and york rake, thinning and pruning a whole lot of trees and brush and hauling a full truck load of metal scrap away, I have gotten to the meat recently. The first of those efforts was to start on replacing the beams that the camp sits on. We could see when we bought the camp that the cement piers were spaced a little wrong and a little sparsely resulting in the undersized 4x6 hemlock beams bowing. They were sound in that they held the camp up for 40 years to date and only the ends, which had not seem the proper flashing, has some rot. 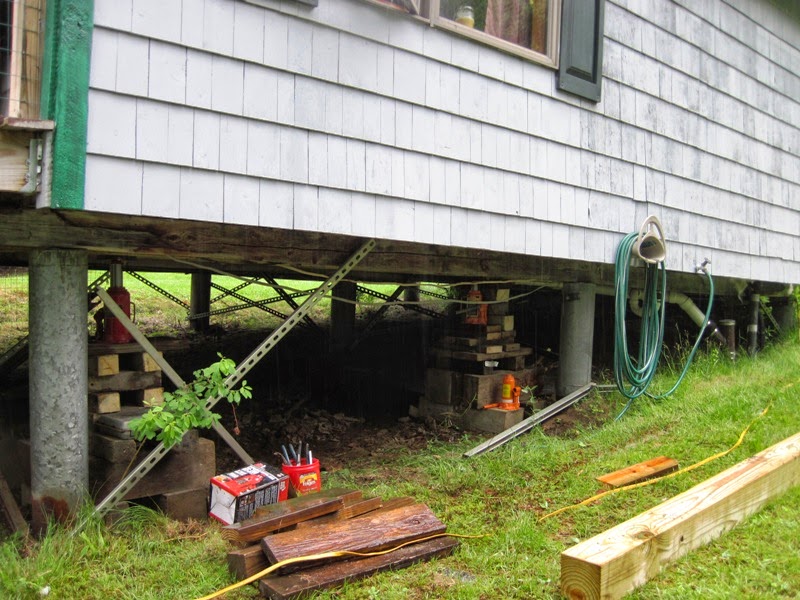 My plan was to jack the camp up, crib it, detach and then slide the old beam out and slide new pressure treated beams in. Because I didn't want to (and couldn't) lift the whole camp at once, I couldn't go with beams that were higher than what I had already, 6 inches. However, I did go with a 6x6 so there is more meat albeit not in the direction you want. Ultimately, I will dig and pour new footings and then run jack beams up to the carrier beams and A-brace them back down. The new piers will be inboard a couple of feet, reducing a 10' span to an 8' span which will also be A-braced a couple feet back in either direction. That will be more than enough to carry the weight of the camp for as long as I'm going to care about it. For now though, I just want to get the beams replaced so I can remove some of the sag. Then I will work on the rest later. 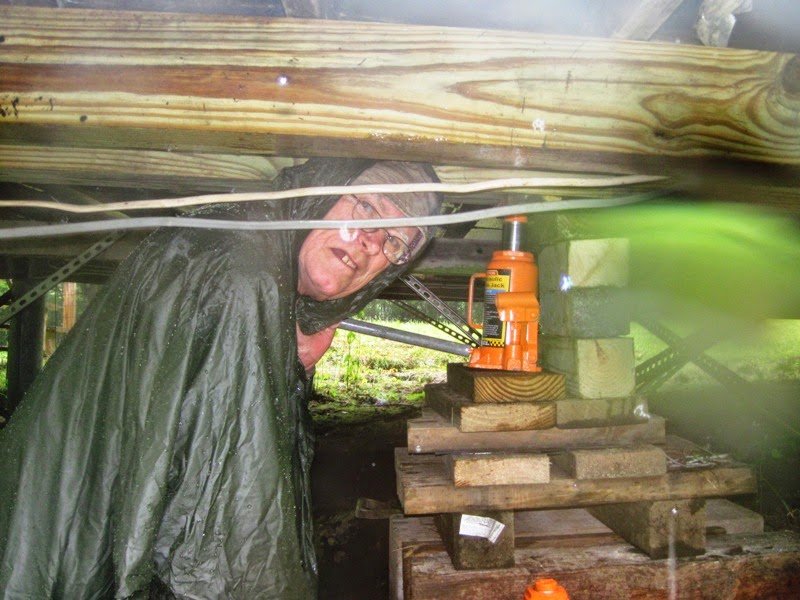 One day a couple weeks back, I started the job with the help of my parents. The day started a little damp but progressively got wetter and wetter to the point where we were in a full torrential downpour. The first beam was to be the proof of concept. I bought a new 20 ton hydraulic jack and acquired a whole lot of blocking to use as cribbing. The idea was to never have the camp more than a couple inches from the top of the cribbing in case the jack failed. We made sure to level and compact the ground upon which we built the cribbing structure. Everything worked perfectly despite the weather. the hardest part was cutting the countless nails used to tie the joist to the existing beam. 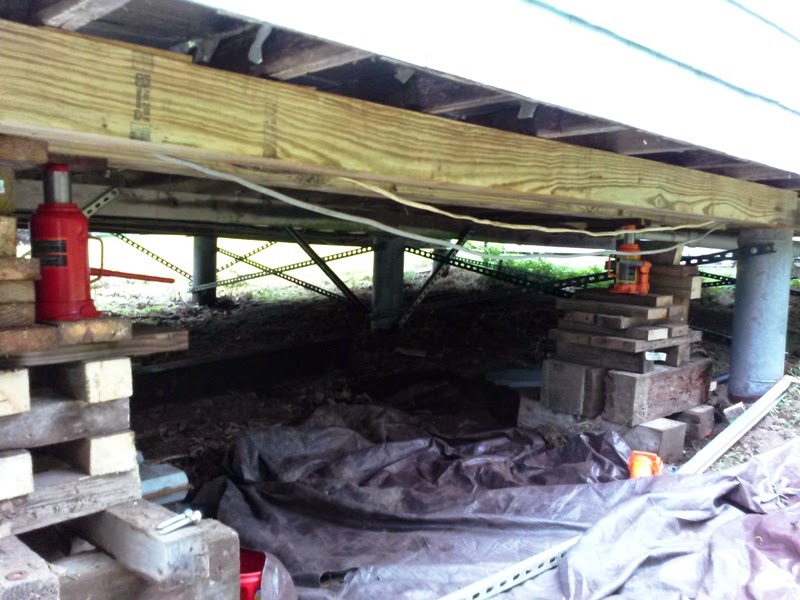 Once it was free the old beam came out without much issue and the new beam, pre-cut and notched to fit the space, slid right in. I sistered some 2x6 onto some of the outer joist that had gotten some moisture and load damage and then we lowered the camp back down the inch or so to rest securely on the new beam. Everything worked amazingly well and we were all surprised. My mother and 72 year old father, who had spent the day outside in the rain, crawling around under the camp in the dirt and lifting very heavy beams we pretty beat. So was I and with that, they headed home and I cleaned everything up for the day.

This particular project had been haunting my thoughts for quite some time. I tend to over analyze things that I do as well as things that I intend to do. I try and look at every little detail so that there are few surprises. This stuff keeps me up at night often, really. I just hate being ill prepared for anything. There were lots of unknowns with this but it worked pretty darn well, at least so far. I still have 5 beams left to replace but I think that I will wait for some good, cool and dry weather to resume that project. 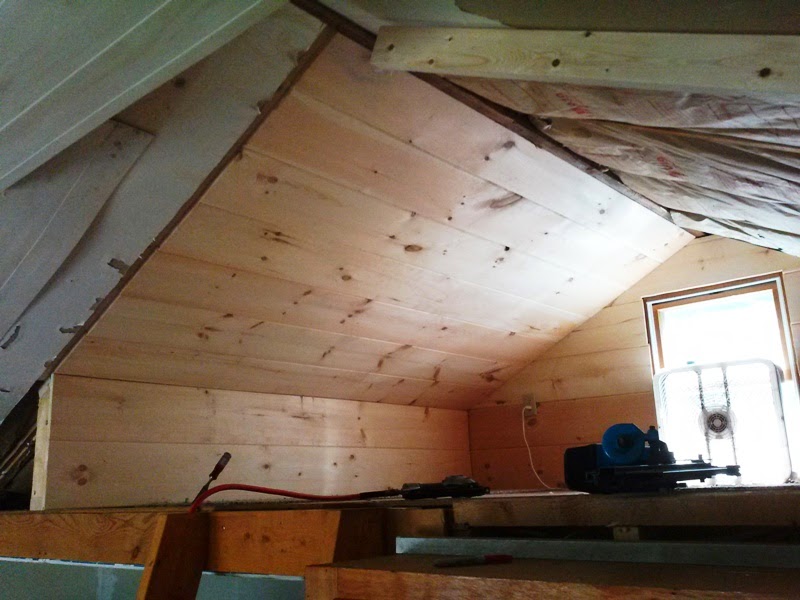 The current major project is the biggest one, gutting and redoing the interior of the camp. There are and will be many phases to this project. At present, I have the bulk of one of the phases complete, that is redoing the loft area. It was pretty rough as can be attested to by the folks who had seen it. Now it is much better. It is insulated and now has knee walls on either side, making the space much more usable. It is also done in V-groove pine now, making it much, much more pleasant than the old, warped paneling. Getting that old paneling out was a chore, but the end result is well worth the effort. 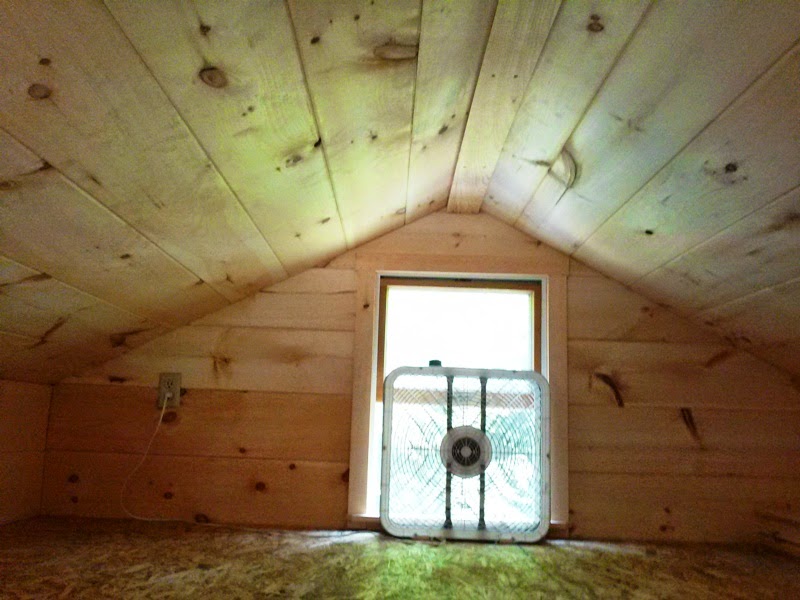 We also threw some new OSB down on the floor in order to firm and clean it up, even though an area rug and two twin mattresses will cover most of the area up there. The window got some pine trim as well making for a nice completed package, and while I had the wall open, I re-framed the window such that it no longer bore the structural load of the camps ridge pole.

The folks that put the window in didn't head, trim/jack or cripple it so the window to divert and carry the load of the roof's ridge pole, which holds the rafters. It was probably OK but it was a fairly easy fix so I made it. The small space is now bright, clean, usable and functional. A new ladder which I have all planned out will also make access much more pleasant. A project for another day. 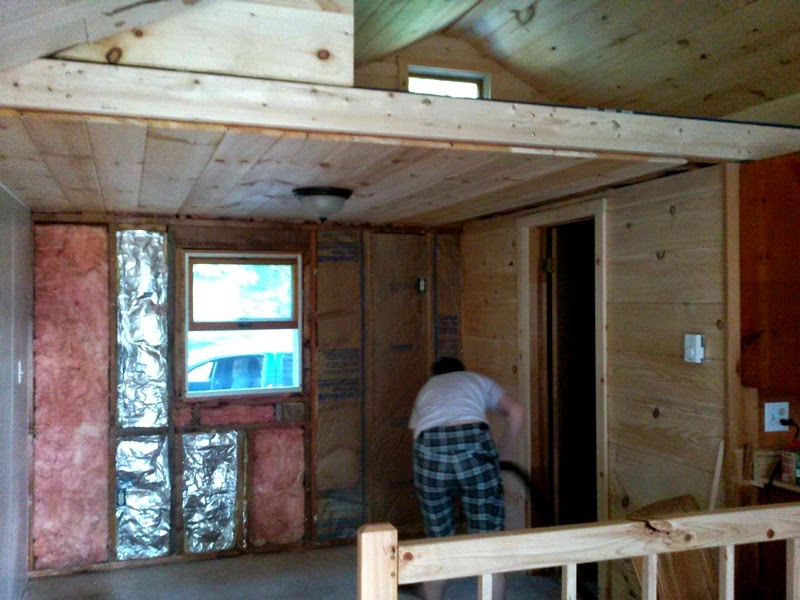 Cathy and I also spent a bunch of time last week on the downstairs. We gutted a large portion of the bedroom and then put the same V-groove pine on one wall and the ceiling. This required moving some electrical boxes out 1/4", an easy task when the walls are open, as well as some insulating here and there. We also fixed some issues as we went along, which inevitably are hiding on projects like this.

More to come later. For now, I need to go mow the lawn and then head back to MA. Not enough time in the day for all of this stuff.
Posted by mkr at 12:35 PM No comments: