Last year for me was a down year, in terms of bicycle racing and training. I consciously knew that I was in for a bad year, statistically speaking, as I'd had a string of great season the previous few. I'd also been pretty much on since 2007 straight, without any breaks. This meant that I was physically and mentally tired of the constant preparation that goes into goal oriented cycling, or anything in life for that matter. 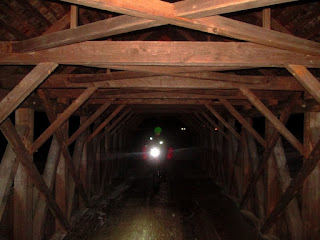 As such, I decided to take it easy and only ride as much as I wanted to, within reason. Reason meaning that I did continue and complete my target of riding outdoors every day of the year. Spending so much time at our place in Kirby Vermont, which is situated near the top of a mountain on a gravel road, made for some creative rides when the weather went south, but still I managed to get through it.

Racing last season saw very few goals. I targeted a fat bike race, the Rasputitsa gravel race, the Kenda Cup East MTB series and had the only overall cyclocross goal of trying to upgrade my race category to Category 1 through racing the Elite races at smaller New England based events. That may seem like a lot when it's written down in front of you, in fact I'm looking at it and saying the same thing to myself, but relatively speaking it was less than a normal year. All in all, things went pretty well and I attained most of my goals on the year. I had a good CX season going until a couple of crashes coupled with failing fitness convinced me to pull the plug. 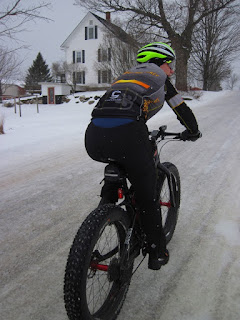 So here we are a couple of months into 2016. I'd be lying if I didn't admit that I feel like I'm way behind already. Sure, we've been riding but the quality has been challenged. As with the previous couple of years, Cathy and I have spent the bulk of the winter up north. This has meant lots of fat biking miles and some great adventures. This season is a completely different story. The fat biking, beyond a few limited outings, has been almost non existent. It's hard to ride snow when you don't have any. Worse, the temperatures and weather have been such that the gravel roads which we'd otherwise be ripping around on a snowless year, are often mud or ice. There was a point in January where we had to resort to night time road riding, in the Northeast Kingdom of Vermont. Still, there have been some good rides but not of the caliber or duration that I've grown accustom to getting throughout the winter months. 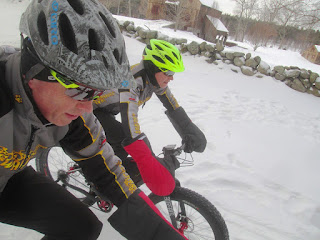 The past couple of weeks have seen us spending more time south, back in MA. A couple weeks ago, when we had a record cold snap, the trail conditions for fat biking were spectacular in and around us in MA. That block of riding alone accounted for the bulk of the real quality miles we've managed to bank for the season thus far. It was great and helped turn things around for me in terms of motivation and determination. Nothing like 12 hours of fabulous riding snow in the course of four days to get you excited about riding again. Three good weeks in a row of increased time and distance and I was tired and ready for a rest week. Naturally, that week of rest didn't work out as I'd planned as we had conditions that were conducive to riding bikes. Additionally, active recovery when you are living on a mountain is a very relative thing, meaning I still got over 10,000' of gain in that week and rode every day.

That brings me to last week, when we got sick of seeing photos and post about our friends back in MA riding in sunny, 60 degree temps while we were up north battling ice, mud and runoff at 35 degrees. We packed up and headed south hoping for some better weather. It did not disappoint and although it was windy, the roads were dry and the temperatures were much nicer. 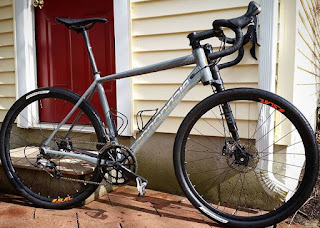 Thursday and Friday were in the 40's which seemed almost tropical to us coming from the NEK. Sean from Cannondale had dropped his personal Cannondale Slate new road bike off at the Bikeway Source for us to try, The Slate is a road frame designed around smaller 650b (27.5") wheels running bigger 42c semi-slick tires. The resultant wheel/tire diameter is the same as that of a 700c wheel with a 23c tire; a normal road bike. The Slate is also equipped with a short 30mm travel Cannondale Lefty Oliver suspension fork. I'd been interested to see and give one a try for some time so when I got the bike on Thursday, I went out for a quick road spin to see what it could, or couldn't do. I was blown away by how quick and nimble it was. It looks more like a mountain bike with drop bars but on the road felt natural and comfortable. I hammered through a short, 25 mile loop on pavement and when I was done, was shocked to see how fast I'd gone. The Slate was no slouch when it came to the road, despite the fork being fully open the whole time.

Saturday I had a long ride planned with a small group and the temps slipped back into the 30's. Cool but dry and fine for a long road ride. We did just over four hours and about 74 miles and it darn near killed me. I felt tired going in but did that ever wipe me out. I made the mistake of rolling on the 32c Clement XPlor knobby tires mounted on the Cannondale Synapse carbon disc for riding gravel, which roll OK but compared to the road slicks the other two guys had, were a bit sluggish, pulling watts that I didn't have to spare. I quite literally limped back home the last five or so miles, in agony, barely able to pedal the bike. 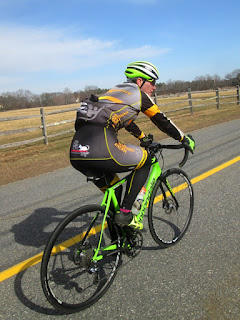 Yesterday I'd decided to first of all, swap out tires on both of our Synapse to 28c semi slicks, something that should roll a whole lot easier. Next, we waited around until the sun came out and it warmed up. I was still chilled from the ride the day before and had little interest in starting before we were in the best weather of the day. This worked perfect and we were treated to some glorious sunny, spring like conditions. There was still a breeze but nothing quite as bad as the day before. We had a great ride along roads once frequently ridden by us, but ones we'd not really been on in a couple of years. It felt great to be outside riding without what seems every piece of clothing bundled on us. We moved along at a good steady clip and despite both being tired, got in a solid 50 miles. Another good day in the saddle marking a great weekend and a good block of quality rides.

So there we have it. I'm behind but hoping to come back up to speed quickly. I know what was missing last season in terms of the training rides that count the most. Those are back on the schedule in earnest this year, starting tomorrow in fact. I can tell right now that it is going to hurt. De-tuning and being out of shape, basically sucks because it hurts so much to come back from. The fat bike and legitimate winters ease that transition as you never really fall as far between seasons and also, ease back into things a bit more gradually. Not having that this year has made the gap much more pronounced.

There is work still left to be done but at least I can finally say, that work has commenced.
Posted by mkr at 3:24 PM No comments: