Some people get golf related gifts for Christmas, others get home related, some car related. The theme often centers around ones hobbies and interests. If you are cyclist then you tend to get bike related gifts. This is great, because being a cyclist, you tend to enjoy such gifts. 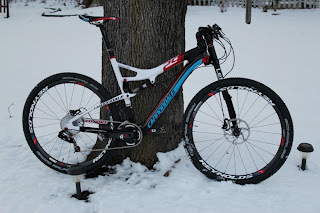 Last year, 2012, was the year of bikes around our house. We turned over more stock than we ever have, purchasing no fewer than eight new bicycles if I count correctly. That may sound like a lot and frankly, you would be right. We have never come close to that kind of a purchasing throw-down before. As a result, if you were to look at the bicycle related expenses for our household you would notice that we spent more than some small countries do annually. If Chris and the shop actually made anything on us, they'd be able to retire. Unfortunately for them, they treat my sorry self well. This is much appreciated I am I truly in their debt. It's going to take me an eternity to pay it off with donuts and beer winnings.

We put the bikes to good use though and obtained some really great results with them. I've got to say that the bikes that we are now on are the best that we have ever had. The cyclocross bikes in particular are just amazing and a huge improvement in fit and function. 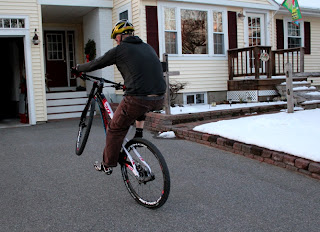 Last summer, we got Cathy a new MTB. It was one of the new Cannondale Scalpel 1 full suspension 29ers. The thing is incredibly light and she loves it. I'd been thinking about getting one as well but had been holding off. My old bike, which isn't all that old, works just fine and we were deep into cyclocross season. No time to think about MTBs anyhow.

Lo and behold, what should appear under the Christmas tree this year but a spiffy new bike box packed full with an awesome new MTB, for me, from Santa with help from the kittens (they helped with the sizing). My wife is awesome and I appreciate her immensely. Last weekend I finally got the time to put it together. Why was it not put together when I received it? Chris knows just how particular I am about those types of things and that I always put my own bikes together. It can be a curse of course because if anything goes wrong, there is nobody else to blame.

I can't wait to give it a try on some real trail. Given the weather currently, I suspect we will be back to dirt in no time. Thank you Cathy and thank you Chris.
Posted by mkr at 4:46 PM 1 comment:

On the ride home from the cyclocross practice race today in Concord, while lamenting about hitting the deck when I hit a patch of ice under the snow right at the start, I got to thinking about a mix of a couple of sandwiches which might yield a really good combination. I often do some of my best thinking while on the bike so decided to develop and run with it.

It started with the classic old school New England Fluffernutter. If you're not from New England you probably have no idea WTF that is. Too bad for you. Growing up it was a staple for kids all around the region. At least, it was for us. Maybe that speaks to the nutrition of the day. Anyhow, it consists of Marshmallow Fluff, which is made right here in the city of sin, Lynn, MA and peanut-butter. Simple, yet effective. Why do we have fluff in the house? Because we saw it mentioned on the Food Network and Cathy had no idea what it was. I explained and she snagged some at the store shortly after.

To add another layer of complexity to the sandwich, I took a page from the diet of the King and his grilled peanut-butter and banana creation that he was supposedly so fond of. Look how that diet worked out for him. How could you possibly go wrong I figured. The result would hopefully be a grilled peanut-butter, Fluff and banana masterpiece that would be warm, gooey, sweet and slightly savory.

Fluffy monkey nuts. Warm fluffy money nuts at that. Sounds like a mixed drink doesn't it? It was pretty good and Cathy's first taste of a traditional New England classic, with a little extra flair. Give it a try. The texture was a little, weird, and I'll avoid going into a description because I suspect it might get this post censored by some of the content filters out there. Probably not an every day meal but certainly something fairly light, fun and different. I bet the kids would like it as well.
Posted by mkr at 1:31 PM No comments: 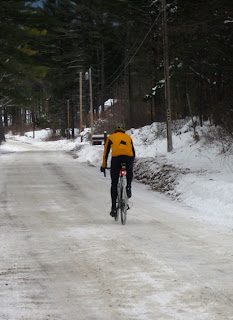 Two-thousand and twelve was a very good year for me in terms of cycling. Many personal bests and many benchmarks were attained. Overall, greatly improved from 2011 results or 2010 results. I also went for the entire cycle of the year, pedaling a bicycle each and every day. I'd never been one for lots of time away from the bike anyhow so this wasn't a big stretch, though I will admit, it did take some getting used to before becoming just another normal part of the day, which it did.

In terms of racing and competition, I still didn't have much luck on the road, though I didn't really give it much of a go. I've also resigned myself to the fact that I'm just not a very good road racer. Bottom line is that I'm not smart enough, strategically. I've got this problem that when the race starts, I go into reaction mode and the reaction is usually aggression. That said, I was pleased with the performance at Battenkill though my own stupidity in the final corner cost me a few spots.

Although I was never able to get a PR at the local/weekly Charlie Baker time-trial, I spent a number of consecutive weeks literally within a few seconds of my best time ever, which was from back in 2009. I use this as a good benchmark of my performance given that we have been doing it consistently since 2006. My MTB racing was pretty consistent as well although I did multi-flat out of two different races this season, something that has almost never happened to me in the past. The cyclocross season was pretty unbelievable though and made up for all of it though. Of course I have some specific regrets but in general, no complaints here.


Clearly this was both my biggest and best year ever, at least in terms of performance. I recognize that moving up an age bracket in cyclocross made a big difference. I also recognize that I gave up racing the elite MTB race at the USA Cycling events a few years back and settled back into the Cat1 age bracket race. Still, a number of races saw the top Cat1 time overall so I don't think there is much of a performance degradation going on there. 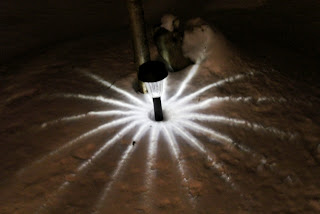 That said, I certainly did a fair bit of cherry-picking, avoiding races that exposed my weaknesses and targeting those in line with my strengths. I also did more structured training, particularly for the cyclocross season as well as listening to what my body was telling me.

Now it all starts over again from fresh.
Posted by mkr at 9:00 AM No comments:


Well, 2012 is now just a memory in the rear view and all counters start back at zero. Hard to believe that it's gone. It was a great year in many aspects, though it had some ups and downs in others. The personal cycling successes were incredible and more than I could have ever imagined. Cathy and I had many wonderful adventures as well, nothing new really and we certainly expect many more in the future. On the work front, things started with change, which gave me some time to do some projects and enjoy each and every day. I somewhat reluctantly jumped back into a job that it turns out really isn't a perfect fit, which has been a challenge and a cause of much stress. I'm not sure where to go or what to do but I think something that I am passionate about might be a wise choice.

Anyhow, the big news was that I was able to complete the streak and pedal a bicycle each and every day of the 2012 calendar year, currently 369 days in a row. Truth be told, it isn't that big a deal. Many people use the bicycle to commute and for their sole form of transit. I was just doing it for health and recreation. Still, there have been days where riding was difficult. I think that when the weather was good and cycling was the obvious recreational choice, it was no big deal. However, what I found just last week while on vacation was that when you had multiple things that you wanted to do, the ski or snowshoe or sled, carving the time out to get the ride in, especially when conditions are horrible, was a challenge. Ironic that it was only the last few days of the year that this was a problem.

Onward and upward to 2013. Who knows what it will bring. Hopefully it will be another good one. I'm certain that it will be in fact, as they all really. Each one is better than the previous, if you simply recognize and believe. I'm not sure when I will take my first day off from riding. I can say for certain that I am junk right now. Not sure what happened but last week I went from feeling great on the bike one day to just dead tired the next. This has continued and today's ride was pure agony. It wasn't super hard or anything, my legs were just wrecked. I'm hoping its the snowshoeing, skate and then classic XC skiing as well as a few taxing rides in the snow and a whole bunch of driving that are the cause and a couple days of nice easy spins will clear it. Will see on way or another. I'm also thinking that part of the issue is the change from lots of short intensity to slightly longer endurance based has thrown me for a loop. I also haven't had an easy spin to unload in a bit. The snowy road conditions require really driving the bike, plus its just fun to go fast on the snow. That makes for a more taxing ride than planned. Excuses, excuses. Honestly, drinking too much last night didn't help at all either.

Right now there is enough snow to make MTB nearly impossible. The road riding is sloppy at present but should dry pretty quickly. Unfortunately we really don't have ample snow for good woods skiing. Cathy and I did get out yesterday at Foss Farm in  Carlisle for a fun little ski. Another few inches and the conditions would be just fine. Hopefully we get it soon as I look forward to the winter activity. On the up side, the new snowblower, a 30" Ariens Professional, that we purchased last year but never really used works awesome. After wrestling with the old one in Maine last week, going to the new one, which is also bigger and more powerful, was a pleasure. It took no time at all to deal with our small driveway and the sidewalks.

Here's to the new year with all of its promise and potential. I'm sure looking forward to making the most of it, whatever that turns out to be. Maybe I'll give something new a try, who knows.