For most cyclists of my generation, the bicycle helmet is a simple, often overlooked piece of ones everyday ride equipment. With each ride, it finds it's way into your staple of attire, atop your head. We always wear helmets. It has become second nature really. As a child, bicycle helmets didn't really exist and none of us at all had or wore one. Sure, we worse them on dirt-bikes and motorized sport but not for cycling. We got by just fine, but times were different. Kids of that generation and certainly growing up in rural areas as I did were hearty and robust. I suspect all kids were.

Today though, with awareness and safety concerns, helmets and safety are common place. You can't race a bicycle without having a helmet and the USA Cycling officials doing a great job of guilting you into wearing a helmet whenever you are on a bicycle. Really, it is just common sense.

With all of the riding that I've done though over the years, I really didn't have any good helmet saved me stories. For the most part, I'd had few major crashes in my life. Most were minor and involved bumps, bruises or skin loss. Never a broken bone, save the broken collar bone as a kid from when I popped the chain in a sprint and went over the bars. No helmet then.

Four weeks ago today I was out for a quick, solo road ride before Cathy and I headed to VT for the weekend. Just a normal, local loop which on my road bike, a bike that had sat unloved for the fall and much of the summer. The weather was mild for that time of year but I wore knickers and a long sleeve thermal jersey as well as long finger gloves, glasses and of course, my helmet, an older Bell Volt that no longer matched the team colors. I'd been doing a few intervals to try and get the most out of the short ride as we were still in the midst of cyclocross race season.

The season started well and had some solid high points. It also had some pretty low, low points. Less than a week before I'd crashed fairly hard at a race in a start sprint mishap and sprained my ankle. It was feeling better but the incident shook me. I was really embarrassed and disappointed at myself and was looking for some long lost redemption, remaining hopeful that I could come back for the end of the season. 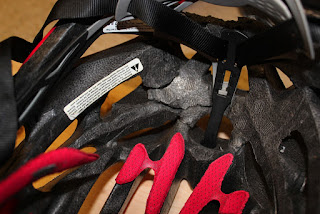 Back to the ride, I was just about finished, riding back on RT225 toward the Bedford town line. I decided to go for one more interval, the town line sprint, just to see what kind of power I could generate. I came in moderately fast and stood to sprint the final 50m before the Bedford town sign. A car had been coming up behind me so I stayed as far to the right as possible, slightly in the shoulder. The car never passed as I was going over 30mph but I could sense it was still just over my left shoulder, behind me.

Almost before I knew it, I saw a fallen tree limb cantilevered off the guardrail hanging out across the shoulder and into the lane, just about handlebar height. I moved left as much as I could without moving into the car's path, ducked and braced. That was the last thing I recall until I was sitting on the guardrail with the Carlisle PD and EMT squad tending to me. I don't remember hitting the limb, or the pavement or anything else. I do have vague, almost 3rd person recollection of the limb snagging the bike and ripping it out from in under me. Nothing after that though.

I can only assume that the driver of the car behind me is the one that called for help. I'm thankful for that and for the fact that they did not run over me. I'm very lucky on that count. The Carlisle EMT's, one of whom I later recognized as Matt, a former bike racer himself, got me squared away and offered me a ride to the hospital for some stitched and evaluation. I kindly declined, shrugging it off as just a scratch. We were heading out soon and I didn't want us to get caught in Friday traffic heading north. I also wanted no part of an expensive ambulance ride or an emergency room and it's associated drama and costs. My face had taken a pretty good beating from the branch, the pavement and I suspect, my helmet itself but that heals. I've never had stitches and didn't want to start then. I could stand, and walk and managed to call Cathy to come get me.

Yes, getting back to my helmet, the whole topic here. Inspection of the helmet revealed that it suffered a pretty dramatic series of hits and completely crushed, limiting the impact it transferred to my head. Looks like the initial hit, the knockout blow if you will, was to the very back left. That region of the helmet was fully crushed and the helmet's internal "roll-cage" supports were exposed. The sides had also cracked, the head strap which provides fit and support had ripped it's molded anchors from within the foam and the back and sides had scars from pavement scraping. Basically, it looked like someone laid it on the ground and jumped up and down on it. Physically intact for the most part but structurally totaled, which was what it was designed to do.

For the most part though, the helmet did it's job, sacrificing itself for the good of, me and my head. Can I say that it saved my life? I have no idea. My guess is that it actually may have, given that I hit the ground with the back of my head at 29mph (according to my Garmin GPS). Sure, it was a glancing blow but dang. Clearly, I'd have lost significant skin from my head and face as I was dead weight skidding down the pavement.

So, there you have it. What was supposed to be a nice easy lunch ride on locals roads I've ridden hundreds of times turned into a relatively severe and at the very least, race season ending incident. My left hip was a mess and apparently, took a pretty good hit judging from the hematoma that developed. It is almost gone now, four weeks later, and the excessive bruising in most of the leg is virtually all gone. The cuts on my face have mostly healed as have to other peripheral spots of road rash and my head is fine, sort of.

Physically I'm fine but I've lost the edge for sure. My confidence is gone, both on and off the bike. The decision making process is still questionable. I've always struggled with self confidence though on all fronts and it had been faltering lately anyhow. I don't know if this is due to what I assume was a concussion, but I'm guessing it is at least in part due to that. I wouldn't say that I see new issues, more that existing issues are more pronounced. Again, I'm attributing a bunch of that to an increased lack in self confidence and self assurance.

To close this, I won't say that everyone should wear a helmet. It's your choice, it's your body. I believe in that sentiment across the boards and that the government has no business infringing on your personal freedom to be stupid, be it with helmets, seat belts, or anything else. You make the choices and you have to live with the consequences. I'm a big believer in Darwinism and that society shouldn't tamper with that. That said, I'm going to continue to wear a helmet, and glasses (which likely saved my right eye). Also, having a RoadID and actually wearing it is always a good idea. I didn't have mine on and was lucky to come to and remember who I was.

Be safe and have a great Christmas. I'm already planning my return for next year, once the holidays are done that is. There is much frustration and angst to be taken out on the pedals. Much angst.
Posted by mkr at 10:04 AM 4 comments: