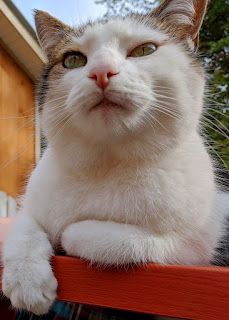 Times change as do attitudes and more, perspectives. Everything I said in that previous post, yeah, forget it. The simple life lesson, the take away learned by 2020 is that isolation is paramount. Being away from people is where it's at and having the space to do so is crucial.

We spent most of the summer confined in virtual isolation within 15 miles of our house. We drove almost nowhere in fact for the first few months the vehicles barely moved. Our cycling habits and routines changed and we drew our area, our heat-map for those in the know, way back in, We couldn't ride the bikeway because of all of the insanity and overcrowding and the local trails were also just too crowded with anxious individuals to make their use enjoyable. If you are paranoid about contracting a virus maybe you should consider staying home?

So our riding changed to outbound only seeking out lesser used remote routes. I've got to say that we put together some fantastic routes and covered a huge amount of fantastic trails. We also expanded outward into some of the conservation lands in outlying towns and found a literally endless supply of trails. This is one thing that MA does right. I have found no better place for public preserved conservation lands than Eastern MA. It is truly incredible that in a area where land is so precious and valuable that the state and towns set aside so much land for public use. The depth of trail on those lands is also incredible. People flock to rural areas like ME, VT and NH to areas like Kingdom Trails thinking that these are the Holy Grail for trail riding when the reality is very different. That which you seek is literally right out your back door. Of course this year many of those better known trail systems in MA have looked like KT at NEMBAFest with the overcrowding and carnage.

For a long time, months, we did big fantastic rides every weekend with the same small group of responsible friends that we'd been riding with all year exploring the lesser used trails. We hooked together systems and connectors and rode stuff I'd not been on in decades. We found new places and shared good times, keeping each other going as best we could. This was incredibly helpful but the isolation of the long weekdays got to me.

In late July I made an effort to retrieve my truck from our place in VT, which had sat empty since February. It took three trips but we finally got it repaired and got it back to MA where we promptly traded it in. In the trips to VT and in talking with my family we discovered that the overall paranoid insanity we'd grown to despise in MA was not present in VT. Sure, the same guidance was there but people used common sense as well. We also had room to breath, to stay away from crowds, to be responsible without being absurd.

So in late July after months of self basic quarantine we go tests and then moved to VT. I started back up on my tiny house project and finished it and have been working on numerous other things. I see my folks almost daily and get together with my brothers for dinner weekly. We are still riding bikes daily and have once again settled into a much narrower heat-map. We go to the store as necessary but by and large, that is it the same as it was in MA. We don't go out to eat, though we did once, but it felt just way too weird for me so I've not been back. I also don't ride Kingdom Trails by and large because it feels like the wrong thing to do; seek out a place with crowds of others.

For some reason, I've lost my will to ride MTB for the most part. Not sure why, possibly due to crowds on trails. Instead we have been exploring here as we did in MA, and riding gravel which we'd not been able to do to date this year. It is cyclocross season though and I miss it intensely. I can't look at the memories of years past as it is just too painful to be reminded of the better times with no definitive hope for their return. My fear is that I'll never be able to do it again as I'll have fallen too far by the time whatever is going to emerge as the new competitive cycling does emerge. Hopefully too much momentum has not been lost. However, given the recent struggles that promoters had before this, I'd be willing to bet what we see in terms of amateur competitive cycling in the US will be very different moving forward. Or not. Maybe it will all return to the best of times. I've know for some time that we can't take the promise of a future for granted and can only live for the day. Never has that been more evident to our generation here, than now.

Anyhow, here we are. In December I would have said we were 75% certain to sell our place in VT and just settle on our place in MA. In May that was more like 90% though we were thinking that MA may not be for us. Now, with the reality of the struggles that an urban state like MA with the overall population density plus the city of Boston and what I contest will be a complete infrastructure collapse just starting to come into focus, I'd say the odds have flipped.

I fear that MA is headed for some very challenging times in the years and decades to follow. The commercial real estate hit is going to be unreal, what with companies focusing on remote working and  no longer needing large scale office real estate. A collapse of the commercial real estate market means a large hit on property tax revenue for cities and towns. Then there is the hotel and restaurant business that has been completely tilled, many permanently shuttered never to return. And then there is the urban migration trend happening among the Millennial generation; those affluent urban dwellers that relied heavily on the public and social infrastructure of the upscale urban center. Now that these attractions are mainly gone and more, being around scores of other people is no longer in vogue, they are moving out. Couple this with the massive disparity of the current education system for the have vs. the have not, in which countless students from challenged demographics are left behind and what do we think is being set up for the future of the urban areas? This doesn't even count the civil unrest and the violent division we are seeing because of it. Detroit or maybe a return to Boston of the '70's with rampant crime?

Regardless, I think it is going to impact the whole state and not in a positive way. So once again, here we are. Right now, I'd say the odds are 75% flipped the other way and with every day that passes without change that percentage increases. Plus if I keep working the projects up here, eventually I'll finish them off and we will have enough space to move all of our stuff and we won't need a second house anyway. Besides, all of those Millennials need a trendy place within walking distance of WholeFoods, a Cafe and numerous restaurants as well as a world class bike path and metro T bus line on a half acre lot with room for chickens :)