Over the course of the winter I've been trying to plug along on the build out of the basement at our cabin. Work has been somewhat slow and I haven't really gotten a good block of time pieced together to continuously work on the rooms, but I'm starting to see some progress. 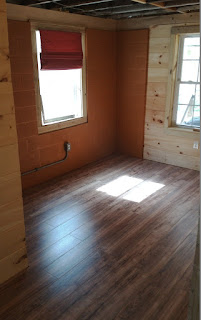 The first stage was to frame it in. Not a big project but it took a bit of time. My brother helped out with the main center divider wall and we got that in pretty quickly. I then decided I wanted to change the sizes of the doors I was going to use so I ended up reframing the rough openings. Again, not a big deal. Then it was on to the framing of the divider wall between the bath and the bedroom. This was had some turns to it so was a bit more complicated and also needed some heading in the floor joist to tie the stud wall in. All of the walls were anchored to the concrete basement floor with concrete screws through the pressure treated bottom sole plate. The rest of the studs were all pine but anything touching concrete was PT. I ended up using torx deck screws rather than nails as well simply because, it was easier and made it simply to make adjustments after the fact, just in case.

From there it was on to the fairly limited electrical outlets and lighting and I ran a new breaker to the sub-panel we had installed in the basement last summer. I went cheap and easy single switched wall mounted sconce lamps, two of them, centered on the wall above what would be the bed's headboard location. The one outlet I had which was on a concrete wall, I face mounted and ran through PVC conduit with a PVC outlet box.

For the small section of exposed concrete block wall, I simply painted the wall with color tinted masonry paint and left it bare rather than framing, insulating and sheathing. If it is too cold, I can always do something in the future but I spent 3 years living in an uninsulated cinderblock dorm at UVM and it was just fine. Sure, I'm losing heat but insulating a basement in a climate with deep penetrating ground frost is a recipe for busted walls.

On the walls of the bedroom I used my old friend, 10" rougher back V groove tongue and groove pine planking. I sealed it with Thompson's water seal on both sides and then nailed it up horizontally. I source this wood from Maine, where the lumber yard has it custom milled for them. At $.73 a board foot it is hard to beat price wise and gives the feel and character I'm looking for, that of a rustic cabin. 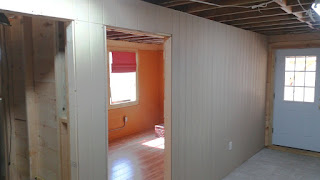 On the outside of the main divider wall I used an inexpensive, exterior grade siding made of press board. It comes in 7/16" thick 4x8' sheets that have shiplap overlapping edges. It is molded to resemble textured V grove planks and comes pre-primed. It is stable, moisture resistant, tough and cheap. When you paint it, it even looks pretty good.

I also got the floor down in the bedroom. We went back and forth as to what to use on this, nothing, concrete dye, porcelain tile. We decided to go with 2x2' raised basement underlayment panels, which use corrugated plastic base under a 3/4" weatherguard OSB interlocking panel to add some moisture protection. On that I used inexpensive interlocking laminate flooring with a styrofoam pad underneath. I've had good luck with the overall stability of the laminate flooring in a mudroom area that saw a fair amount of moisture from tracked snow in the past. This basement is dry as was proven last summer and over this past winter, a season of many freeze thaw cycles and good amounts of rain. I'm also planning to run a dehumidifier as well and the basement is a walkout, so is only partially below grade. 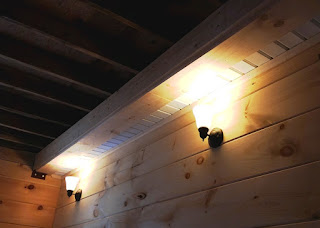 For the ceiling I wanted something that was light, bright, clean and easy to remove in case I needed access to anything above; wiring or such. After some though, I decided to go with vinyl soffit, which I've worked with a number of times before. I love the stuff. You just need ledges from which to span it and for than, I used simple pine planking that I routered a 45 bevel into to dress it up a bit. On the base of the beam, which is an old hemlock 4x6" that I sistered with pine 2x8" on either side and then a 2x4" on the underside channel. I put a pine 1x8" on the bottom side that overhung to the side of the wall, which gave me my ledge from which to hang the soffit up over. The end result is clean, looks good, was easy to install and is functionally great.

I'm trying to get creative when choosing building materials and build this area with an eye toward function. I'm using things that can maybe handle a little humidity or possibly moisture while keeping cost reined in. We'll see how it all works out but so far, so good. I really enjoy re-purposing things for uses other than that which they were intended. Bottom line is that it's fun and I finally am getting back into the swing of accomplishing something tangible.

Lots more to do. The bathroom is going to be interesting for sure. I've got some neat plans for materials for that one. Can't wait to get started.
Posted by mkr at 9:26 AM No comments: 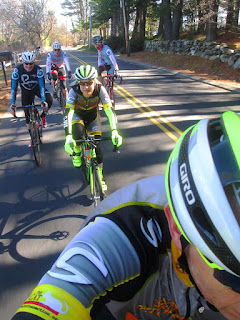 Cathy and I had the opportunity to take advantage of the wonderful spring weather this past weekend and get in some good solid riding. A nice, quick, 40 mile road ride Friday and then a fantastic, longer group road ride on Saturday out to Sterling MA. We got some good rolling terrain and some nice views through the orchards of Harvard and the hills west.

It was nice to be out on these roads, ones that we frequented in the past but have not ridden much if at all in the past couple of years, Amazing how much I've forgotten about what a truly spectacular area we have to road ride in the northwestern suburbs and beyond. Winding, narrow, tree lined back country roads abound and on the weekends there is little motor vehicle traffic. Certainly one thing that I miss when in VT is the variety of paved road. Don't get me wrong, I love gravel, but when conditions are poor, it's nice to have options. 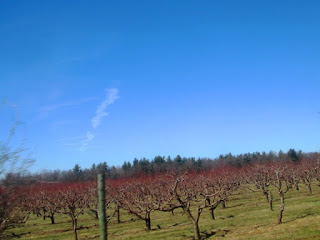 Anyhow, it was a nice ride for sure and felt great to be back into the swing of the road ride thing. We are getting some good miles in on the The Bikeway Source Cannondale Bicycles Synapse disc bikes. Currently they have 28c Vittoria Zaffiro Pro semi-slick tires on them, which are great for spring pavement if at the cost of a little weight and rolling resistance, but can also handle gravel without much complaint.

Yesterday, Cathy and I decided to do separate rides, so she headed off with a friend for some MTB in the Burlington's Landlocked Forest on her new Cannondale Bicycles Habit 27.5 120mm travel bike. I'd swapped the stock 60mm stem out for a 90mm to make the bike handle a bit more traditionally and also cut the bars down a couple of inches, bringing them within an inch (still longer) of what the bars on her fat bike are, which are wider still than the bars on her Scalpel. It made a huge difference and she really enjoyed the bike, getting a chance to get a real feel for it. 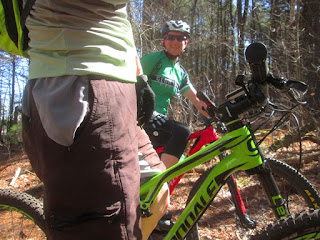 I opted to go for a big MTB XC loop, heading through multiple areas to try and find some new trail areas near Russell Mill in Billerica. I was fatigued from the start but moved along out to Estabrook Woods, through Carlisle Conservation and into Great Brook State Park. From there I made my way to Russell Mill Pond Forest, and area I've not spent much time riding. After looping around looking for signs of the new trails to no avail, I hopped out to Rangeway Rd and searched from that end. I found the ones in the town forest and traced the way back to Russell Mill, through a neighborhood. The other trail network is in the state forest, which I need to explore from the south end I think. Eventually I made my way back to Great Brook and Estabrook and home, a broken man.

Anyhow, a great weekend of riding and some good hours in the training bank. Another big week for the team, which is hopefully going a long way toward getting us into shape for the upcoming spring classic gravel season.
Posted by mkr at 9:39 AM No comments: