Now that we are well into the throws of yet another single speed cyclocross (SSCX) race season, the topic of SSCX bike conversion has come up. Actually, what came up was the topic of zip-ties as a means of converting a normal, geared CX bike into a race ready SSCX bike and how this technique makes the single speed purist cringe. Let me start by giving the definition of a SSCX bike as defined by USA Cycling;

USA Cycling National Championships Singlespeed Rules
UCI rules will be applied: exception that the 33mm tire width rule will not be enforced. Riders must have no larger than 35mm tire & compete on CX bike. No flat bars. No spiked or studded tires. Riders must have a free wheel, one cog, and drop bars.

Now let me elaborate a bit on the science behind using zip-ties to convert a normal geared cyclocross bicycle into a single geared bicycle. Really, it is pretty straight forward. You simply take a zip-tie and lash the shift lever paddle to the brake lever. This effectively renders the shifter immobile, thus disallowing shifting of the otherwise geared bicycle, sort of, in some cases and with certain brand components. Let me also state that I'm not saying people would necessarily intentionally shift either. However, when you are used to shifting a bicycle, you often have the involuntary response to shift, especially when you are under physical stress and not thinking clearly. It happens all the time even on my dedicated SSCX bike, which has no shifters. I still try to tap them up or down even though they are not there.

The technical, mechanical issues with zip-ties are many. The least problematic zip-tie candidate is SRAM Double Tap as it has a fixed brake lever to which the shift paddle is lashed. Unfortunately, the levers pivot on different planes so in order to not inhibit the brake lever throw, you must zip-tie the shifter paddle to the brake lever somewhat loosely. This doesn't allow much room for shift paddle movement but it does leave some clear wiggle room. In talking with first time SSCX folks who have run this setup, the bike does tend to shift around. The bigger technical flaw with zip-ties centers around Shimano STI. The STI shift lever is a two part system, one part being the brake lever. Lashing the two together doesn't prevent one from shifting either the front or rear in one direction (lower in the rear and larger in the front). I've seen issues that competitors have had with this setup first hand when then inadvertently shifted their bikes.

There are a number of much better mechanical options for converting a bike to single speed, at least in my opinion, that involve using a chain tensioning device. You don't have to purchase a single speed specific frameset either. Inside each and every geared bike is a single speed just waiting to emerge. All you have to do is remove some of the geary clutter.

The simplest way to convert a stock bike to a USAC legal SSCX bike would be to first, pull the derailleur cables off. This renders your derailleurs useless, at least for shifting. Next, get some spacers and a single cog to replace the cassette on your rear wheel, or better yet, convert one of the countless spare wheels kicking around the basement. These parts are pretty easy to find. Check Bikeman.com out as a good starting place given that they have a whole single speed store front or talk to your local shop. I like this style spacer kit as it comes with a cog and has a large assortment of individual spacers. You can also grab some extra cogs, which are pretty darn reasonable, so that you have options. The cheap Dimension BMX cogs work great for steel freehub bodies buy can chew into alloy bodies. I use the Surly cogs as they are wider at the splines and provide a better interface with the alloy freehub body I use. 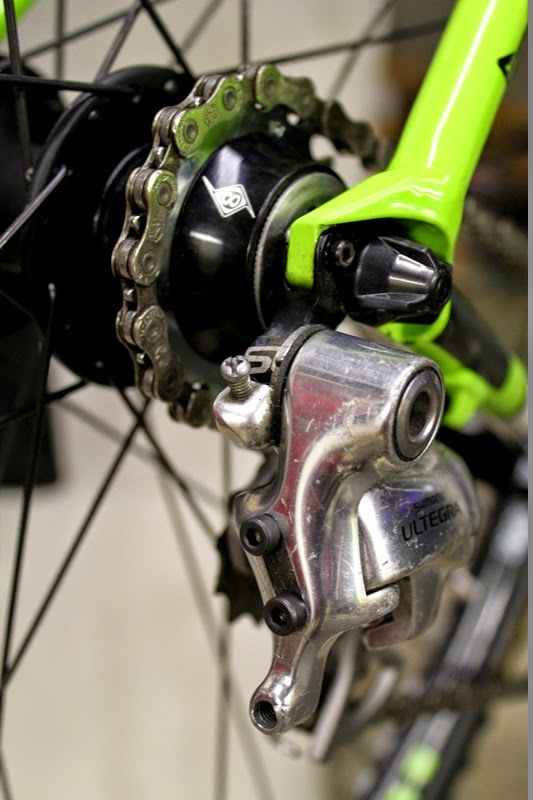 The next easiest way to convert, which is actually a bit more secure, is to follow all of the steps of the above short cable conversion technique except leave out the cable. Instead, head to the local hardware store and buy a couple ~25mm long 4mm x .75mm thread Allen head bolts. You then remove the relatively short limit screws on your rear derailleur and replace them with these screws. Then use these new, longer screws to fix the derailleur into a position such that it feeds the chain onto the cog perfectly. Note that you want to screw the limit H(igh) gear adjuster first and then once you are centered correctly, screw the L(ow) adjuster down to fix the rear derailleur into that position. This is more secure than the aforementioned technique because when set with limits from both sides, the derailleur can not move in either direction, not just in one.

Of course, there are other methods as well. One of the first methods that we all tried when first getting bitten by the SS bug on the MTB, over fifteen years ago now, was the Surly Singulator. These devices saw limited success though widespread acceptance. We all had them and collectively, we all hated them. That said, some folks still use them. For what it is worth, I much prefer using an old derailleur with either the cable or extended limit trick.

You could also use an eccentric rear hub like the White Industries model that a number of prominent local SSCX racers are employing. I've not had any experience with these hubs but they will allow you to convert a normal, vertical rear dropout frame into a dedicated single speed without a chain tensioning device, albeit at the expense of a new wheel build.

When you get ready to convert to a dedicated SSCX rig, and if you spend much time racing SSCX you will, you have options. There are some great off the shelf rigs available now that use sliding rear drops, or slotted rear drops or even eccentric bottom brackets. There are also some cool new products available that allow the conversion of newer BB30 or PF30 bottom bracket bikes to SSCX.

These frames tend to be some of the most high tech and lightest on the market if that is your thing but also, have become the norm. You can now buy eccentric bottom brackets that work with BB30 or PF30 bottom bracket shells and a smaller 24 or 22mm spindle crankset to provide the fore and aft movement required to properly tension the chain. This is the setup that Cathy and I have been using for over four years now. From what we have seen it works great, though it is a bigger expense than some of the other methods. We have dedicated, full time SSCX bikes though which are also the bikes that we do 95% of our CX specific training on. That means they do not sit idle other than on race day. In fact, they see much more use than our dedicated geared race bikes.

So there you have it, a few means of conversion. The only other thing I will add is that I like to over do when it comes to security on the SSCX bike builds I do. One the rear, I sandwich the cog between a couple of guide plates, making it impossible for the chain to ride off the cog. Lately I have been making plastic guide donuts that fit as spacers onto the freehub body. I've also used old cassette cogs that were larger than the driver cog and ground the teeth off, though you don't have to do that. I also run an outside guide ring on the crank, for a number of reasons. With it, you don't need shorty chainring bolts, you also keep your leg cleaner as the chain doesn't rub against it and of course, it helps keep the chain on the front chainring.

If you have any questions about anything I have written or about any other techniques or best accepted practices for SSCX, shoot me a message. I'm happy to help spread the word of one geared conversion and single speed love. If you are local and need help, I'm easily bribed with beer and readily available to help with your parts spec options or conversion.

Also, though I'm a bit of a single speed purist, I certainly don't want to come off as being exclusionary. There is a time and a place for the simplicity of the zip tie. For instance, those just wanting to try it out for the first time or dabbling here and there. That said, I'd like to see a reliable, safe SSCX bike in every CX racers quiver and if you are racing for series or championships, you really ought to be on a real bike, a real SSCX bike, not some silly imitation.

And yes, the SSCX shall indeed inherit the Earth. It will, just you wait and see.
Posted by mkr at 4:39 PM 8 comments: