Honestly, it doesn't seem to be over yet, winter that is. Today marks the final day of March and yet, this AM was well below freezing and at present, the temperature is still only in the 30's. And this is in MA. Not exactly the weather that we were hoping for when we gave up on winter and headed back south from ME last week. 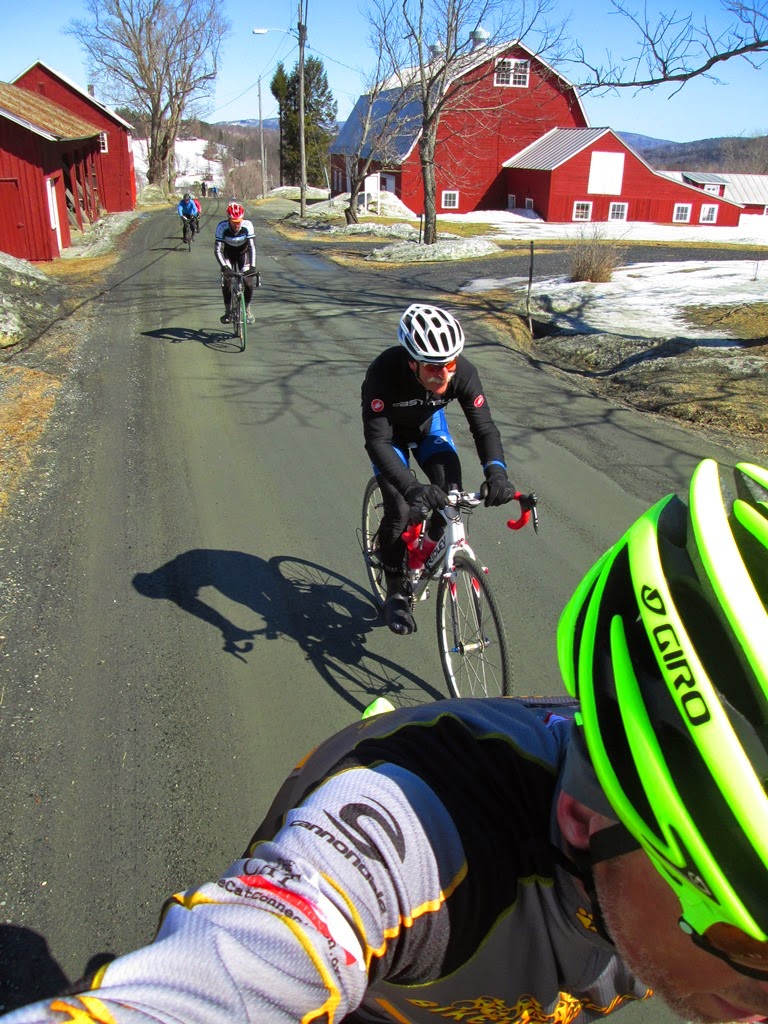 Still, there are signs that spring may indeed be on approach. We have lost a ton of snow despite the unseasonably low temperatures and night time refreezes. The roads are also getting better day by day, in terms of drying out. That said, I had a number of very wet road rides last week including a solo 50 mile ride that culminated in torrential downpour the last 15 miles as well as a 33 degree heavy wet snow road ride on Saturday. It will be some time before we can get offroad of course but that is to be expected. Ah, spring.

This past Sunday Cathy and I participated in the Vermont Overland Maple Adventure Ride (VOMAR), hosted by good friends Peter and Kim Vollers and their Vermont Overland offroad club. The ride was primarily gravel and took place in Woodstock, VT. We expected carnage in regards to gravel road conditions but were treated to some roads in surprisingly good condition. I literally couldn't believe or understand why they were so good given the winter. All that I can figure is that the mild temperature swings are pulling the frost out gradually, a little at a time, while firming back up at night but not pounding frost back down in. Also, we have been fairly dry, precipitation wise the past few weeks. I don't know, but I like it. 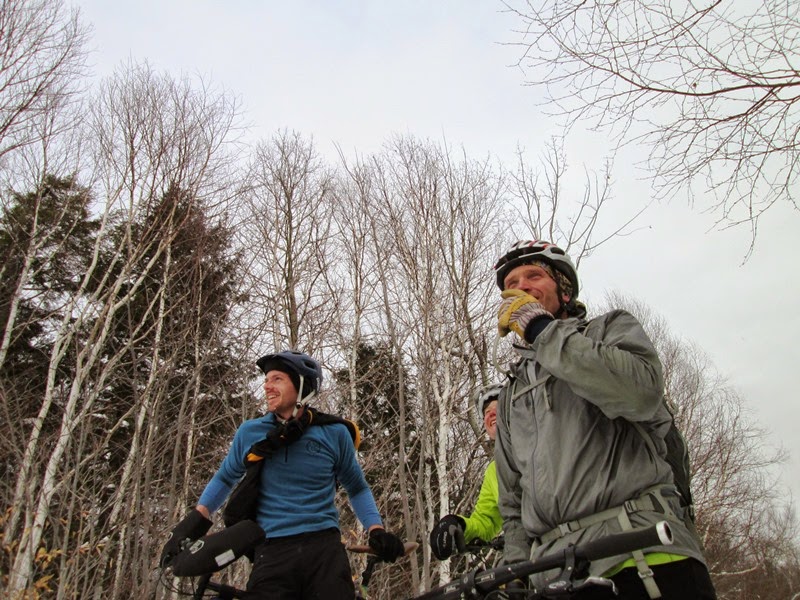 Getting back to the winter in review, where to start. We began the season very, very happy to be done racing after a long cyclocross race season. The off season greeted us with low snow conditions up north which were perfect for the spiffy new Borealis fat bikes we'd gotten that fall. We'd started to hook up with a bunch of the guys from the Coos Cycling Club from Gorham, NH and had some great rides in new locales and Cathy and I also took to the Great North Woods of NH for a couple of remote and ultra scenic fat bike rides. Life was very good, and so we headed into the holiday's with great cheer.

Through the holidays we had great times and looked forward to a whole winter of fun and frolicking in the snow on our new fat bikes, exploring new places and seeing new things. Early January was cold but did not see much snow which made XC skiing poor but the fat biking was still OK. Soon after mid month we had a thaw, and then rain and warm. This glazed and flooded much of the sled trail, at least locally. The next weekend was the Moose Brook Fat Bike Race, where conditions were actually excellent and we had a wonderful time in relatively mild temperatures, at least for late January in northern New England. 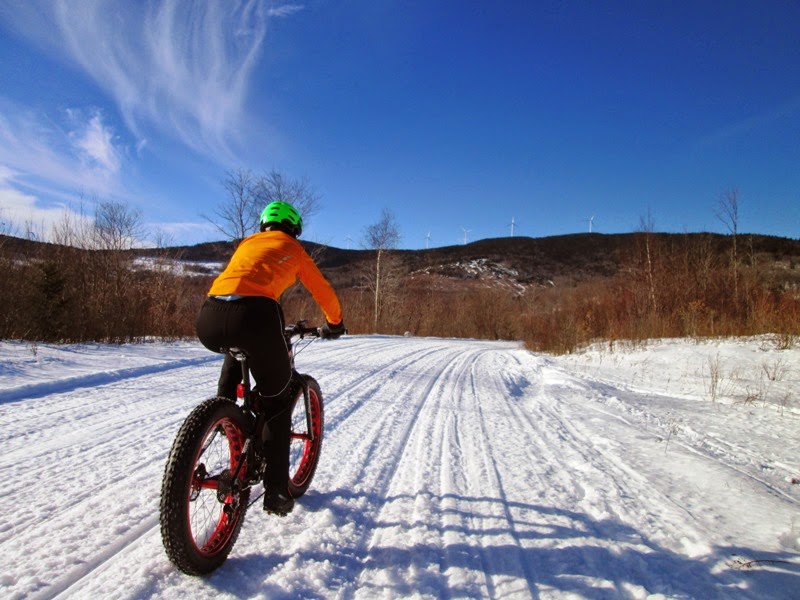 Two days later it started snowing and as far as I can tell, never stopped again until a couple of weeks ago. No, not really but the weather pattern swung wildly. We received weekly or better, light and fluffy powder snow. The temperatures settled in with highs in the teens and lows well below zero. This is the pattern that took hold and continued, literally for a solid month, giving way to a slight respite barely one time, for a short two days, before settling back in for nearly another month.

Cathy and I logged countless evening rides in the cold darkness fighting hard for every foot on trails that just never had the conditions to properly setup. The result became a bit of dread for the daily fight on the same section of trail only to make it a short distance afield in the time allotted. Ride would frequently average 6 or 7 mph average which meant that two hours in single digits netted you a dozen or so miles, only enough to get you to the first real intersection of trail. This meant countless out and back rides. If there is one thing that I abhor, it is an out and back ride. I'm all about the loops. 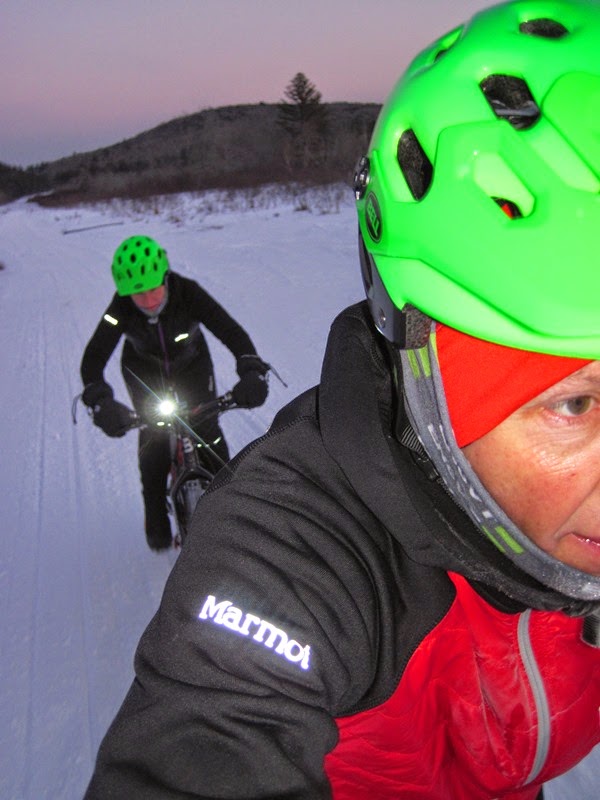 Don't get me wrong, we were still better off than many of our friends in MA, who had it way worse snow wise. Many of them could not get out at all and had to resort to riding indoors. It never came to that for us despite riding our bicycles literally ever day of the winter.

On the up side, and believe me, there was an up side, we spent a ton of time riding with friends from Coos Cycling Club. Jason and Ben organized some rides and invited us and we set some up as well and we got a chance to meet Jamie and Aaron. Our friend Jamie is very like minded and just wants to ride every chance he can. It didn't matter the conditions, whenever I suggested a ride Jamie was all in. Better yet, he also started setting up rides. Through these folks we connected with Liz, Steve and Ari of SAaLT at Libby's, which has some of the best food and community I've ever experienced. 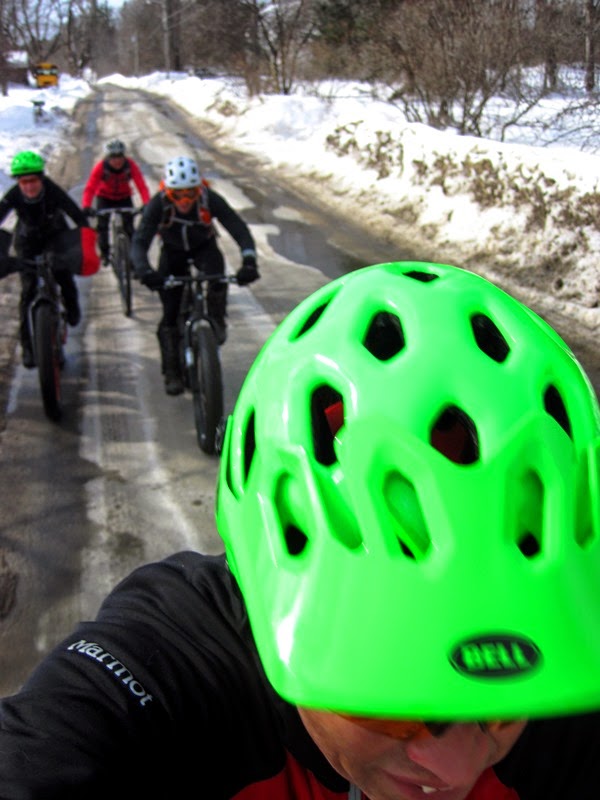 Making that connection saved the winter in ME for us, literally. We've never really entrenched in the cycling community in Bethel. Not at all. I've tried to organize and connect but we just never hit. Now the sled community, sure, we fit right in and really enjoy working with the club. But not cycling, at least not in Bethel despite there being countless individuals who ride in the area. I suspect that will play heavily into upcoming location decisions for us.

Another fun component to the winter was getting the chance to ride, if only a few times, with George and Rebecca from Lyndonville. We did a couple of KT runs on the fat bikes as well as a great winter gravel/snow/ice/slush/mud ride. Great people that I look very forward to riding with a bunch this coming summer as I work on our place in Kirby. 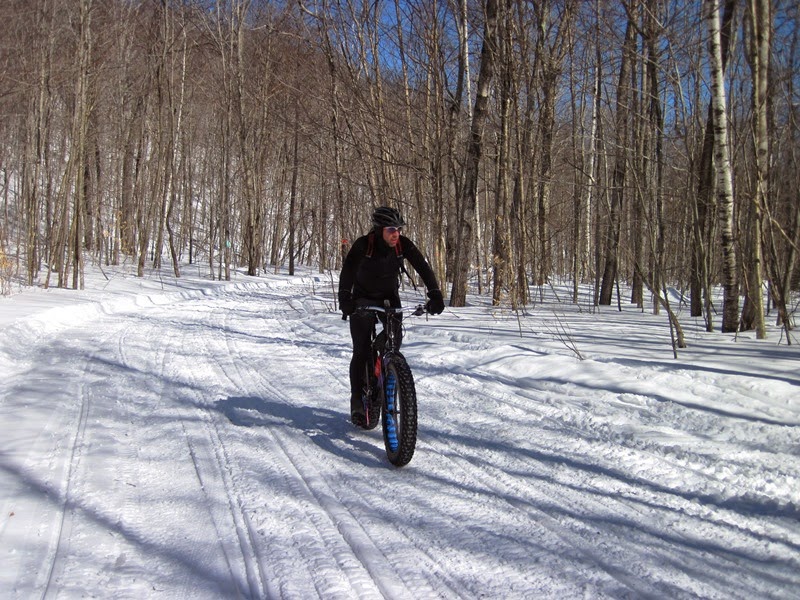 I had plans this fall for and had been so looking forward to the big long epic adventures. The reality was that conditions just did not cooperate. Teammate Kyle and I attempted a big day long adventure ride in January from Gorham, NH. It was a good solid ride and a full day of pedaling yielded about 40 hard fought miles. The other one real epic that I attempted with Kyle, a reverse rerun of a ride I did the previous winter, turned to mayhem. This was the Evergreen Valley Loop, a 65 mile ride through very remote sections of National Forest in Maine and New Hampshire. The day started great, with spectacular conditions but within an hour started to continually degrade to what was, in long sections, unrideable, even downhill. The trail was just too loose. With no choice, we plodded along wearing the daylight, and warmth, thin. When finally we reached a main road we bailed straight back on it, closing the dark lid on a nearly nine hour excursion in the cold. 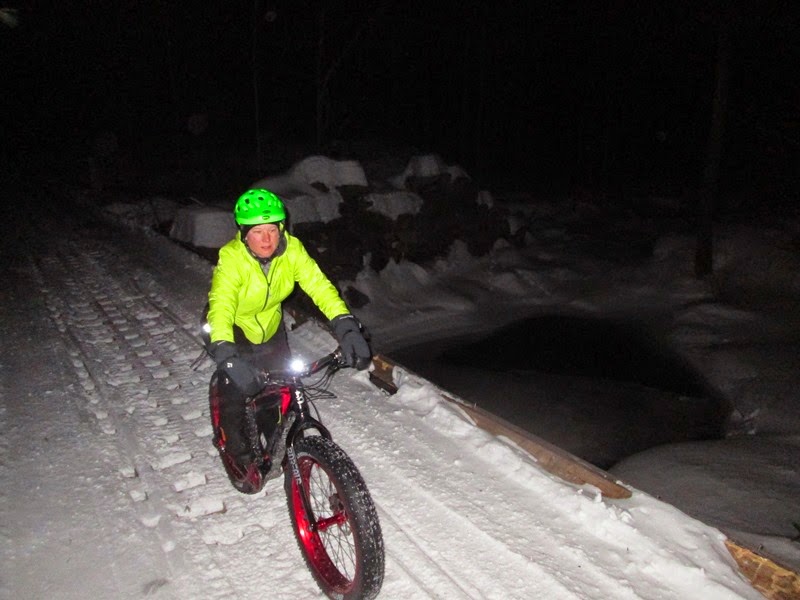 There were other excursions, early in the season, that were more positively memorable. There were also some late in the season that were equally memorable. We ended last week with a number of really great rides, a positive conclusion to a winter with a great title and cover photo and a compelling back cover copy that lacked a bit of thrill and excitement in between.

I'm sure the tone of this post is sour and sounds like whining. Realistically, it is. The winter has been long, cold and snowy which translated to generally less than awesome fat biking. If you skied Alpine, you were loving it though with day after day of powder. Next year, I think we may venture into Alpine Touring to add a little variety. I just need to get over this compulsion to ride my bike every single day. It has been going on for so long though, breaking the habit is hard, hard because the count goes back to zero. Hard because what if it never climbs back to one. 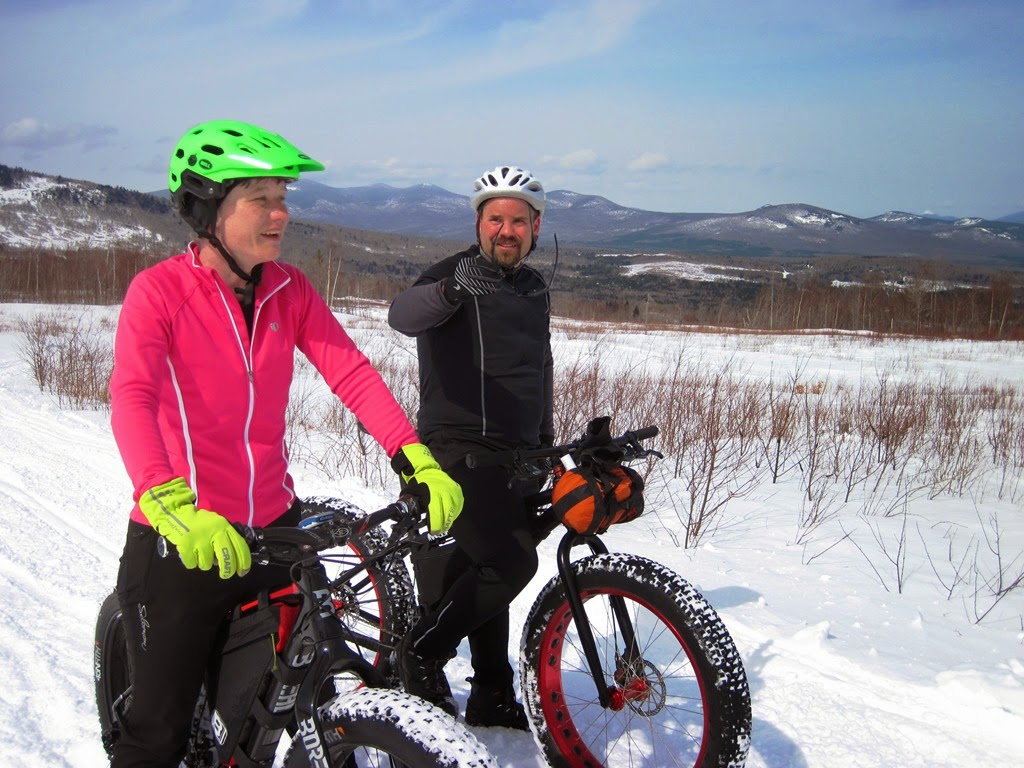 So yes, the winter has been long, dark and cold. Winters in the north country make you feel small and insignificant and alone. If you let them, that is. Community makes all the difference, and is key to making it through. We all need more than just shelter and warmth if we are to survive, we need life and to live, in spite if not in celebration of the weather. Spring will eventually come, or at least it always has so far, and with it there will be change and rejuvenation.

This winter may part less with sorrow than last, but there will always be hope held for next.
Posted by mkr at 2:44 PM No comments: